For many, it’s to see one painting: Picasso’s masterpiece Guernica, one of the greatest and most influential works of art anywhere in the world. But as Spain’s national museum for modern and contemporary art, and with a collection of over 21,700 works, it’s not easy to know where to start when exploring the museum. That’s why we at Devour want to share our Reina Sofia Museum highlights with you. Consider this your guide to one of Spain’s—and the world’s—must-see museums.

If you’re short on time, you might want to limit yourself to the first of these, located on the second floor of the Sabatini building. That’s where the most famous Reina Sofia Museum highlights are on display: Dalí, Picasso, Miró, and more. Bear in mind that the collection is organized thematically, not by artist. So if you’re obsessed with Picasso, you’ll have to jump around between multiple rooms (and floors!) to see everything the museum has to offer. With that in mind, let’s get down to business!

Insider’s Tip: You might be surprised not to find explanatory texts on the walls of the museum. But don’t worry! Each room has its own information sheet available in English, which you can pick up as you enter.

Start your visit in Room 201, which sets out the artistic and political context of Spain at the turn of the 20th Century. Here’s where you’ll find early works by Pablo Picasso like his Bust of Smiling Woman. Less well-known but equally fascinating is the work of the Spanish Impressionist Joaquín Sorrolla, so don’t miss Return from Fishing. Once you’ve got your bearings, you’re faced with a choice: turn left to delve into surrealism and the works of Joan Miró, or turn right to discover the development of cubism.

If following the latter path, check out the works of Juan Gris, Georges Braque and Picasso (in his cubist period) in Room 210. Just next door are some spectacular early works by Dalí, including the almost photo-realistic Figure at the Window in Room 209.

If you decide to head the other way, start with Miró’s House with Palm Tree (Room 202). One of the Catalan artist’s first masterpieces, it offers a fascinating view into the development of Miró’s style. In the same room you’ll also find his later Man with a Pipe and Painting. Room 205 hosts several surrealist works by Salvador Dalí, including Face of the Great Masturbator, one of the undisputed highlights of the Reina Sofia Museum.

For many visitors, it’s the rooms dealing with the Spanish Civil War that leave the greatest impression (Rooms 206.1-206.11). In many ways, the Reina Sofia is the closest thing Spain has to a museum of the Civil War. Its collection includes everything from moving war photography to passionate propaganda posters (Miró himself contributed in his own way with his print Help Spain.

And then, of course, there’s Guernica. A powerful and disturbing cry against the horrors of war, it’s hard to do justice to the scale and force of the painting without seeing it for yourself. Make sure to check out the wealth of preparatory sketches, photographs and additional material nearby, which help to put this masterpiece in context.

If you’ve not had enough yet and want to explore more of the Reina Sofia Museum highlights, head upstairs to Collection 2. Occupying the entirety of the fourth floor, far fewer visitors make it up here. That means it’s not unusual to find yourself with an entire gallery to yourself! There’s a fine collection of international art, but we recommend exploring the work of Spanish post-war artists. Room 406 is a great place to start, with Tapiés’s Superimposition of Grey Matter, Saura’s Lola, and several works by Eduardo Chillida, perhaps Spain’s most celebrated sculptor. Also worth checking out is the collection of Spanish photography in Room 415 and Estampa Popular, politically-charged prints from the 1960s.

Finally, Collection 3 in the Nouvel building can be a little esoteric at times, but its collection of material from the 1980s Movida Madrileña in Room 1.09 is a great introduction to a movement which still defines much of the city’s grungy-chic aesthetic. 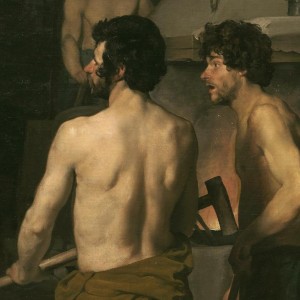 Menu
PrevPreviousHow To Make The Most Of Winter in Madrid
NextMadrid in March: Best Things to See & DoNext